Estimated Reading Time: 2 minutes Recently, Nissan announced its partnership to British adventurer Chris Ramsey to embark on the first all-electric driving expedition from the magnetic North Pole towards the […] The post All-electric Nissan Ariya to Drive From Pole to Pole in 2023 appeared first on EMobility+. 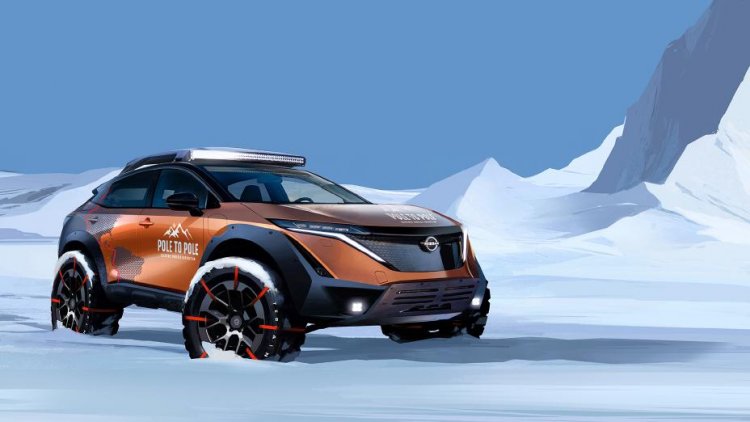 Recently, Nissan announced its partnership to British adventurer Chris Ramsey to embark on the first all-electric driving expedition from the magnetic North Pole towards the South Pole.

The Pole to Pole Expedition will take Ramsey and his team on a Nissan Ariya e-4ORCE, which will travel more than 27,000 km across many regions and continents. It will depart in March 2023. There are temperatures ranging between -300C to 300C. Ramsey will become the first person to drive a vehicle from pole to pole. He will travel from the Arctic through North and Central America before reaching Antarctica.

This route will take you through some of the most brutal and beautiful landscapes in the world. The Nissan Ariya will drive you from Pole to Pole through breathtaking and uncharted terrain, including snow-covered glacial areas and treacherous mountain climbs.

Asako Hoshino (Nissan Executive Vice President, Marketing and Sales), said that they are proud to announce their partnership with Chris Ramsey and his Pole to Pole expedition team. The all-new all-electric Ariya crossover SUV allows you to travel further, faster, and more comfortably. We know that Chris and his team will find it the ideal partner on their all-electric adventure.

This exciting, high-profile and challenging adventure supports Nissan Ambition 2030. It is the company’s long-term vision of empowering mobility and beyond, with electrification at its core. This vision envisions exciting vehicles and technologies that can be used to empower customers and society.

Ramsey’s expedition Nissan Ariya e-4ORCE will have a modified exterior to suit the harsh Arctic and Antarctic conditions. It will also feature upgraded tires, suspension, and wheels. As a second vehicle, an unmodified Nissan Ariya e-4ORCE can be used throughout the Americas.

e-4ORCE, Nissan’s most advanced all wheel control technology, accurately manages power output as well as braking performance to ensure smoothness and stability. This system increases driver confidence by following the intended driving line across a variety road surfaces, including snowy and wet roads.

Chris Ramsey, the founder of Pole to Pole commented that “electric vehicles can handle the harshest environments – from bitter cold at the poles to the hot, humid jungles in South America. And that they are thrilling to drive while meeting the daily needs of drivers all over the globe. It is a great honor to have such a global brand as a partner in our expedition.”

The post All-electric Nissan Ariya to Drive From Pole to Pole in 2023 appeared first on EMobility+.

Electric Vehicles Are Expected To Account For More Than 33% Of New Car...

Any alternatives to Lithium ion Batteries?

Honoring The Powerful Women Driving The EMobility Sector In India