India is the world’s largest market for two-wheelers, with roughly 360 million ICE 2-wheelers on-road. Millions of these vehicles continue The post E- 2Wheeler Retrofitting | Scope and cost of conversion appeared first on EVreporter. 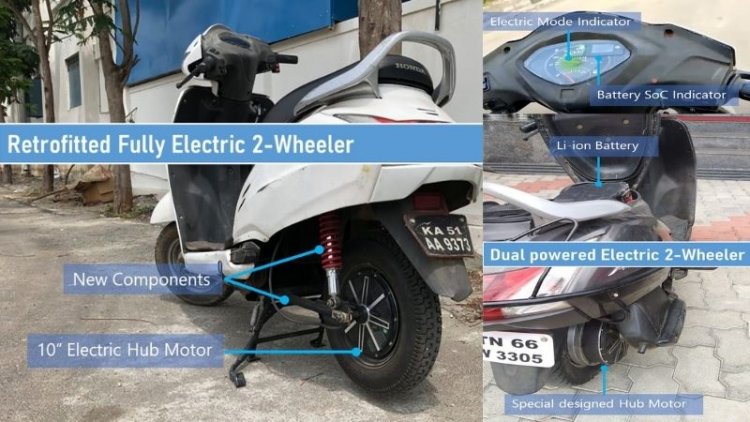 India is the world’s largest market for two-wheelers, with roughly 360 million ICE 2-wheelers on-road. Millions of these vehicles continue to be in use despite being old and polluting. Electric vehicles have gained significant traction in India’s 2W and 3W space. However, just adding more EVs to the existing vehicle load in the name of reducing carbon emissions is not an ideal solution as it will make the roads even more congested. To make clean mobility accessible to everyone, India needs to have an effective scrapping policy in place with provisions to allow conversion of ICE vehicles to EVs, subject to necessary terms and conditions.

Types of EV Retrofitting | Which conversion is better?

Old petrol two-wheelers can be converted into fully electric vehicles or dual-powered vehicles (switchable between petrol and electric).

The decision about which conversion is better for a particular vehicle depends on the condition of the vehicle body, chassis, and the IC engine. If the engine is ceased with the body and the chassis in good condition, it can be converted to a completely electric vehicle. If the IC engine is still performing well, it can be converted into a dual-powered vehicle that allows the driver to switch between the electric and ICE powertrains with the help of a button.

The process of conversion

For conversion into a fully electric vehicle, the ICE vehicle will be first stripped of its ICE components – engine, fuel tank, exhaust and drivetrain, leaving only the chassis, body, wheels, etc. This is followed by the installation of an electric motor and a battery pack, accommodated according to available space constraints. In addition, a conversion kit consists of a power controller to regulate the flow of energy and a recharging system to allow the flow of electricity to the Li-ion batteries. The conversion process also requires tweaks to the wiring and other electronic functions.

For conversion into a dual powered vehicle, all the ICE components are kept intact. The process involves the mechanical integration of the wheel hub and the electric hub motor to run the wheel powered by a Li-ion battery as well as petrol, followed by electrical integration of components in the vehicle so that people can drive their vehicle with the battery power and when required switch to the engine.

ARAI approved retrofitting kits should be used to ensure compliance with safety and regulations standards. The kit provider needs to get separate certifications from ARAI for retrofitting different models. The retrofitted vehicle needs to be re-registered at the RTO as an electric vehicle.

Approximate cost of retrofitting and overall implications for the vehicle

The cost of retrofitting depends largely on the motors and battery specifications.

With the battery technology available today, converting an ICE two-wheeler to an EV with decent power and range could increase the weight of the vehicle by 15-20%. Power to weight ratio is an important factor in retrofitting as it impacts the overall performance and dynamics of the vehicle. However, old ICE vehicles generally have a robust build and can withstand this additional weight which is distributed by tweaking the chassis and suspension setup.

As per our experience, it takes two skilled mechanics one hour to convert an ICE two-wheeler into an electric. One should go for an ARAI approved retrofitting kit with IP67 rating that can withstand heavy dust and water sprays and has negligible maintenance and service requirements.

How can the Government support retrofitting ?

The central government is working to define clear guidelines for retrofitting solutions. State governments like Karnataka plan to offer sops to electric vehicle startups to retrofit petrol-powered two- and three-wheelers into electric. Delhi Government also recently made an announcement about allowing 10-year or older diesel vehicles to ply in Delhi-NCR roads, given they are retrofitted and transformed into EVs.

If the central and state governments can provide subsidies on the retrofit kit purchase, it can motivate many old and polluting ICE vehicle owners to convert their vehicles to electric. Retrofitting is not eligible for any incentives under the FAME 2 scheme. The government can also support retrofitting efforts by reducing GST on the full kit from 28% to 5%.

Varun Rai is Business Development Manager at Coimbatore based EMF Innovations. EMF Innovations provides a complete retrofitting solution to OEMs for converting ICE two-wheelers to electric. The author can be reached at varun@emf-i.com

The article was originally published in EVreporter Feb 2022 Magazine that can be accessed here.

PERFORMANCE AND LIFESPAN OF LITHIUM ION BATTERIES FOR EV CARS

IonQ And Hyundai Motor Partner To Use Quantum Computing To Advance Next-Gen...