Electric Vehicle Revolution - Is India Ready? Or not? 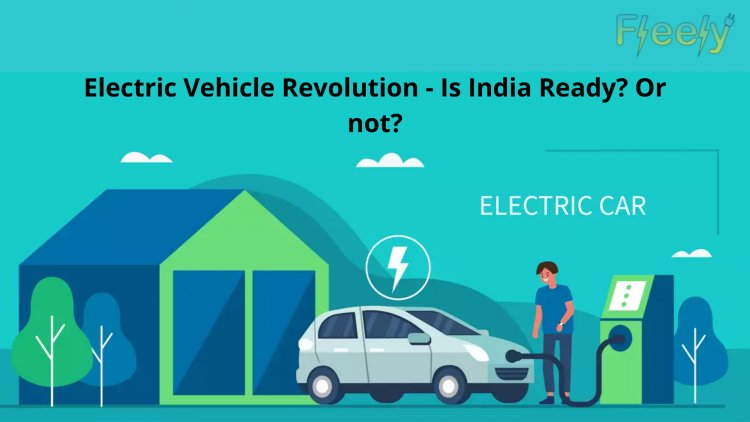 In this article we are going to present the EV scenario, related stack holders, government policies. And you need to prepare the much talked about electric vehicle revolution.

Electric vehicles are changing the world of transportation. Over the past five years, the global EV market has grown at a penetration rate of 2.6% in 2019, with an average rate of 43%.

Many Covid-19 recovery plans are emphasizing on electric vehicles. This includes recent plans in China, Germany, France and Canada as well as the US. India is currently lagging behind other important markets such as China, Europe and the United States.

On the other hand, EVs are a hot topic in India. Road transport electrification provides a wide variety of uses. It is a green industrial approach. Which helps the economy recover after a pandemic. It aims to cut oil imports to strengthen energy security.

It is also important to reduce pollution and tackle climate change. It is an important component of the global net-zero objectives and an important measure of carbon emissions reduction. Which is second only to the greening of the power sector.

Two-wheelers account for about 97.5% of all electric vehicles sold in India. Which indicates a particularly strong market in the two-wheeler and three-wheeler segments.

Since the outbreak, state governments have imposed several positive eve policies on the central governments. For example, the government has subsidized the deployment of e-buses and charging stations at the national level.

Delhi also announced a progressive electric vehicle strategy in 2020. Including purchase incentives based on battery range and category. These initiatives are promising but they require collaboration and collaboration between the policies of the central government, state government and local government policy.

The government cannot rely exclusively on subsidies to fuel EV adoption and India's role as a value chain member. It would also need to attract a lot of private investment into the country. The good news is that investor interest is showing signs of improvement.

Tesla announced last year to set up a factory in Karnataka, southwest India. And the venture capitalist is set to invest more than US$300 million in electric vehicle start-ups across the country. However, this is in contrast to global EV investing.

Before the pandemic, automakers planned to invest at least $300 USD in electric vehicles over the next 5 to 10 years. More than half of the funds were earmarked for operations in China. The rest was divided between Germany, the United States and South Korea, Japan and France.

India must develop an appropriate policy framework and incentives to become an important EV investment destination.

The government started with the FAME (Faster Adoption and Manufacturing of Electric Vehicles) programme. program which was started in 2015. Which was designed to encourage EV manufacturers as well as EV manufacturing in India.

The second phase of FAME saw a significant increase in EV subsidies to the tune of USD 1.4 billion. In which only 85 percent subsidy has gone for buying and 10 percent for charging infrastructure. It started in 2019 and was scheduled to run till 2022.

Accelerating local manufacturing is once again a key component of this phase, but the results are still not expected after 2 years. The objective of 10% EV adoption for Phase 2 was introduced by 2021.

India has the Potential to be a Leader in EV Battery Recycling:

Hence, India is not ready for end-of-life electric vehicles. To be honest, there are only a few of the top players.

In 2019, only 94,000 metric tons of lithium-ion batteries were recycled worldwide. Most of which have come from portable consumer gadgets. On the other hand, end of life EV batteries will flood the battery market in the next decade.

According to the World Economic Forum, to recycle half of those EV batteries by 2030, the recycling factor would need to be increased to 25.

On the other hand, the EV battery recycling sector is now grappling with a variety of issues. From relatively low primary raw material costs to profitability due to inefficiencies in changing the chemical composition and recycling process of EV batteries.

With India's right incentives and policy framework, many EV battery recycling can eliminate bottlenecks. And be a partner in the next decade. The market for end-of-life LIBs is projected to grow to 705,000 by 2025 and to 9 million by 2040, the majority of which are EV LIBs.

What should happen for Electric Vehicle Revolution in India:

The electric vehicle revolution we talk about or discuss is not going to happen in a fortnight or even a year.

It is going to take at least a year or even a decade. The industry is ready, we are ready and every small step is taking us towards the future.

Following are the 5 points that we think the government should do to promote faster adoption of electric vehicles in India: