New King Plaza site in Seattle, Washington helps promote equitable distribution of public fast chargers and the state’s goal to reach 1 million EVs on its roads by 2030 EVgo […] The post EVgo Continues Network Expansion and Push for “Electric for All” in EV Charging with New Fast Charging Station in Seattle appeared first on EMobility+. 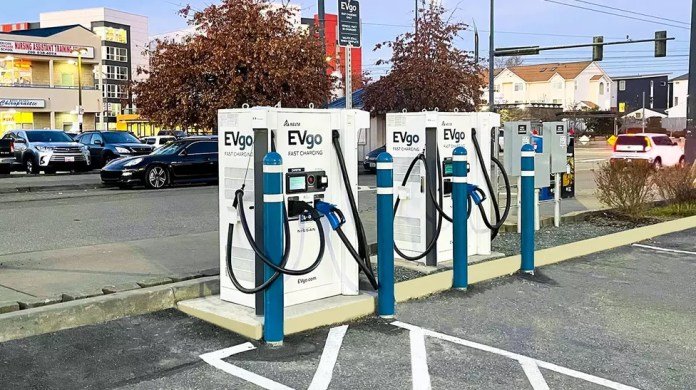 EVgo Inc., the nation’s largest public fast charging network for electric vehicles (EVs) and only platform powered by 100% renewable electricity, today announced the opening of a new public fast charging site at King Plaza in Seattle, Washington. Featuring two 100 kW fast chargers and located at 7101 Martin Luther King Jr. Way South – in one of the most diverse ZIP codes in the country — the opening of this station supports EVgo’s “Electric for All” mission, the equitable distribution of EV charging infrastructure, and the state of Washington’s broader sustainability plan.

The EVgo network features more than 800 public fast charging locations and upwards of 1,200 Level 2 charging stalls across 68 metropolitan areas in 35 states, including over 35 EVgo sites across the state of Washington. Since the beginning of 2021, EVgo has added more than 25 stalls across the state of Washington as part of its broader network expansion. To execute on the vision of “Electric for All” and ensure EV infrastructure is located in convenient and accessible locations for as many people as possible, EVgo incorporates the EPA’s EJscreen tool, a nationally consistent, validated third party environmental justice (EJ) database, to inform site development decisions.

EVgo focuses on building infrastructure to support the growing adoption of EVs, particularly in dense urban areas where many drivers may not have access to home charging. Funded in partnership with Nissan, this station will improve access to EV charging for the growing Seattle metro area and support the state of Washington’s broader energy plan, which aims to reach over one million EVs on its roads by 2030.

“Getting more drivers into EVs requires more public fast-charging infrastructure across the community landscape,” said Cathy Zoi, CEO of EVgo. “EVgo is committed to ‘electric for all’, so we build stations in easy to access shopping centers and other public places. This gives confidence to drivers that they can rely on public charging infrastructure in Washington and beyond.”

“For the City and the region to meet our ambitious, but necessary, climate goals, we need strong investments in EV infrastructure. It is critical that we advance these priorities equitably, ensuring that when new technologies are available that we prioritize access for all our residents,” said Sara Nelson, Seattle City Council Chair of Economic Development, Technology and City Light.

“The addition of this new charging site is a major step forward for our local community as well as the broader state,” said Debra Smith, General Manager and CEO of Seattle City Light. “We look forward to further third-party investment that enhances access to public fast charging in our city and building upon the increased momentum around our region’s energy and sustainability initiatives.”

“It is vital that, as we tackle the climate crisis, we do so through the lens of justice and equity. We know that neighborhoods like Othello have been disproportionately affected by pollution and climate change. This groundbreaking is an investment in renewable energy, in a clean future, and in Othello. I’m proud to be here in support of this,” said Girmay Zahilay, King County Councilmember.

For more information about the locations of EV chargers within the EVgo charging network, visit www.evgo.com.

The post EVgo Continues Network Expansion and Push for “Electric for All” in EV Charging with New Fast Charging Station in Seattle appeared first on EMobility+.

Bounce Infinity E1 Offers A Unique ‘Battery as a service’ Option – The...