The economics of owning an electric 2-Wheeler in India

The Electric Vehicle (EV) industry is thriving, but the biggest and most evident downside in the Two-wheeler space is that The post The economics of owning an electric 2-Wheeler in India appeared first on EVreporter. 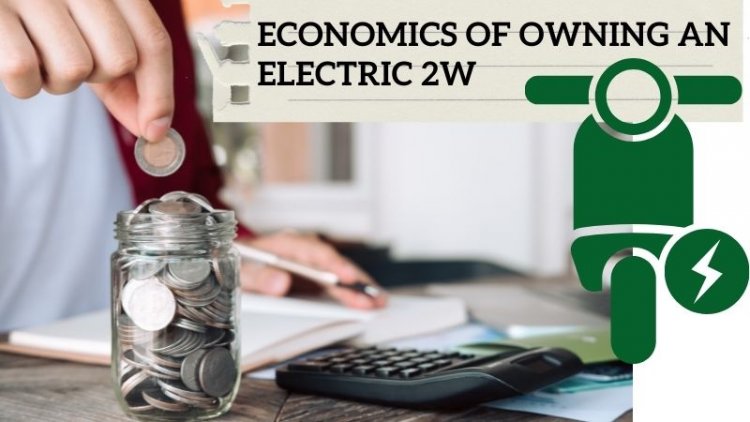 The Electric Vehicle (EV) industry is thriving, but the biggest and most evident downside in the Two-wheeler space is that electric 2Ws are priced slightly higher compared to the conventional fuel vehicles. In this guest article, Mayank Jain – Director at Crayon Motors discusses the economic incentive of owning an electric 2W for personal use.

India is a two-wheeler country. Since the 70s, each decade, came with its own style and brands of two-wheelers. Every middle-class household, growing up, has seen their fathers and now, also mothers riding two-wheelers. The homes that did not own one, aspired for one. Two-wheelers offer affordability, convenience, and high mileage, making them the vehicle of choice for most Indians. Besides their primary purpose of movement, two-wheelers are also a symbol of achievement. Working elder siblings or tuition taking middle-class mothers – we all aspire and set financial goals to buy a two-wheeler for ourselves or our loved ones. It’s pocket-friendly and an easy travel option for short or reasonably long distances too, in smaller towns. People who grew up in the 80s and 90s have seen cars lying idle in garages, while their parents would hop-on the family scooter to run quick errands or for outings in the evenings. Two-wheelers are practical, easier to maneuver through the gargantuan traffic that most Indian cities offer, and again, are easy on the pocket.

Even as India’s spending power increases, at heart, we remain a pocket conscious country. As people, whatever we buy, we look for value for money.

The Indian two-wheeler market has expanded immensely in the past few years. However, at a time when fuel prices are touching the three-digit mark, filling-up a full tank of petrol in their two-wheelers is fast becoming a pocket pinching affair for most. Albeit expensive in the face of it, the much-awaited alternative – electric two-wheelers – seem to offer superior operational price realization in the long term.

By doing some simple math and working out the numbers, we can comfortably conclude thatelectric two-wheelers are cheaper to own and run, than petrol and diesel equivalents.

Consider a scooter in the price bracket of Rs. 75,000/- that gives a mileage of 50kms/litre. With fuel price at a stupendous rate of Rs.100 per litre, the running cost of the scooter is effectively Rs. 2.0/km. An average daily commute of a working person in India, would dent the pocket by Rs. 60/day or Rs. 18,000/year. This is not considering any incidental service or other maintenance expenses of the vehicle.

In a similar price range, we can get an electric two-wheeler, with a mileage of about 60km per charge. Now, considering electricity at the rate of Rs. 7/unit, this should roughly translate to 14p/km. This is approximately Rs. 4.20 per day and Rs. 1260 per year. Here again, we have not accounted for any maintenance related costs.

Going by this simple math, owning an electric two-wheeler leads to a total savings of around Rs. 16,740 per year. This margin will increase as EVs and their subsequent technologies get cheaper. Even if the electric scooter was more expensive than Rs. 75,000 to begin with, considerable savings can be realised over the lifetime of the vehicle.

Even though in the current market, EVs are at a slight premium compared to their gas- powered counterparts, savings are a great reason to invest in an EV two-wheeler. The savings will ensure any annual maintenance costs and will also serve as an earning that will recover the premium paid over the course of a couple of years. There is also no denying, that the EV market globally has ballooned to $500 billion and will continue to grow as every major player either already has EV products on their catalogue or soon will. This will only mean the prices of EVs will go down, the cost of parts like motors and batteries will go down, EV range will go up, battery technology will improve to provide more power and more range at a cheaper cost. The charging network will also catch up to eliminate the range anxiety that so many early adopters talk about.

Coupled with this, the fact that petrol and diesel prices are on a constant rise, EVs seem to be the sustainable, logical, ecological and ecomonic way forward.

What about EV battery replacement expense?

One major and maybe, even the only remaining real challenge with electric two-wheelers however, is replacement of the battery. In my opinion, one year’s savings along with the value of the old battery, will fetch the consumer a new battery, in fact, this cost might be even less. This is calculated with an average of about three years, in case of the life of a lithium-ion battery. Which means, this is an expense that a consumer is likely to incur only after a minimum of three years of purchase of the vehicle. Keeping this in mind, an EV consumer can save almost Rs. 10,000-12,000/month. These savings are estimated to happen, just by switching from traditional two-wheelers to electric scooters. Since this technology is still nascent, the future is only going to be flushed with more advancements in technology and the running cost of EVs are only going to go further down.

A wise man once said, “A penny saved, is a penny earned”. Switching to electric two-wheelers is like accumulating small savings, over a period of time, in a precious piggy bank.

Disclaimer: The views and opinions expressed in this article are solely those of the guest author.

The post The economics of owning an electric 2-Wheeler in India appeared first on EVreporter.